We started at 7:45 so pretty much the normal time. We discussed the lunch spot with T-Bone and then set off separately. The weather was good – definitely a clear day ahead and the hike seemed to go by fast as we mainly walked on hillsides & ridges. There wasn’t a lot of ascent on this section so it was relatively easy going. 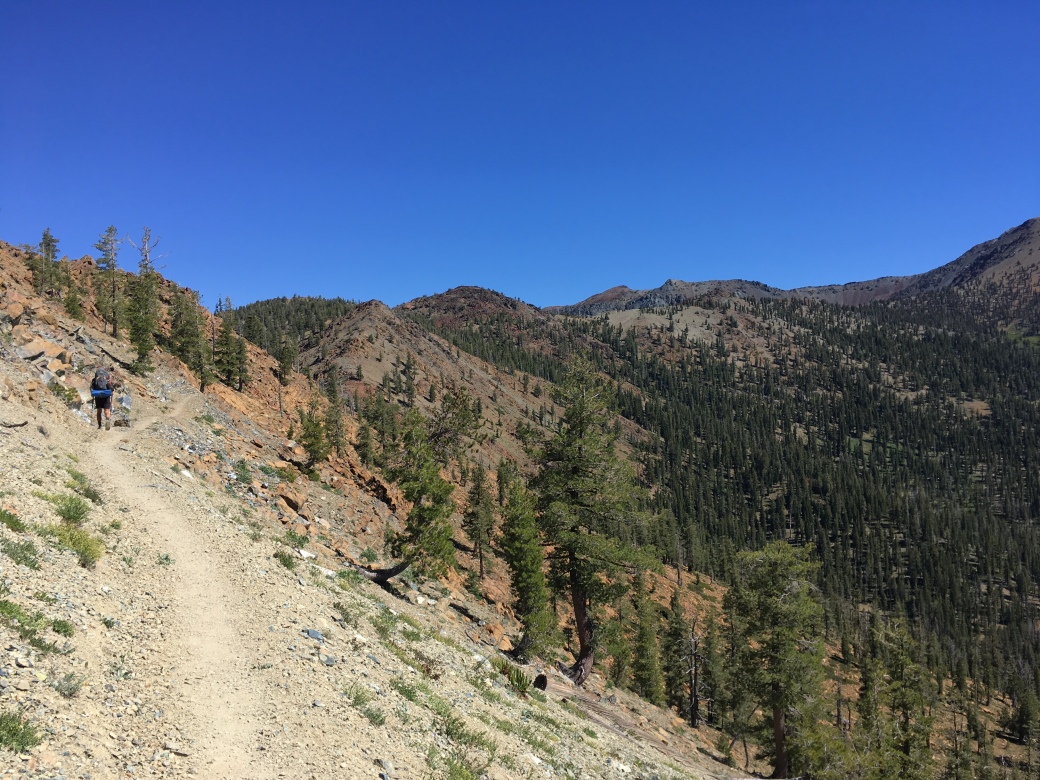 We took water at a stream after 2,5 miles and caught up with Coconut and Tomb Raider. They told us that T-Bone was planning on taking an early lunch instead – at the Deadfall Lake. After hiking on the trail took a turn – we could suddenly see these alpine lakes and big boulderfields of gray granite. We reached the wide and dark Deadfall Lake and saw it was very windy but couldn’t find T-Bone anywhere, so we hiked on to the initially planned place.

We crossed some streams, the trail around them lush green with grass and bushes, and soon reached the water source at 10,6 miles. We had a shorter water carry ahead plus lunch so we needed to fill our bottles. We also met a lot of day hikers going to the lakes.

After 13 miles we crossed a road and passed by an open parking lot with amazing views into the distance. As it was pretty windy we decided to hike about a mile further until the hillside covered us from the wind. The rock was suddenly red instead and made a big contrast with the blue skies. We found a nice spot between the boulders and had a long sunny lunchbreak. Soon enough T-Bone passed us and the other two too, so we discussed where we’d fill water next and where we’d camp. We planned to do a very long day – 29 miles! 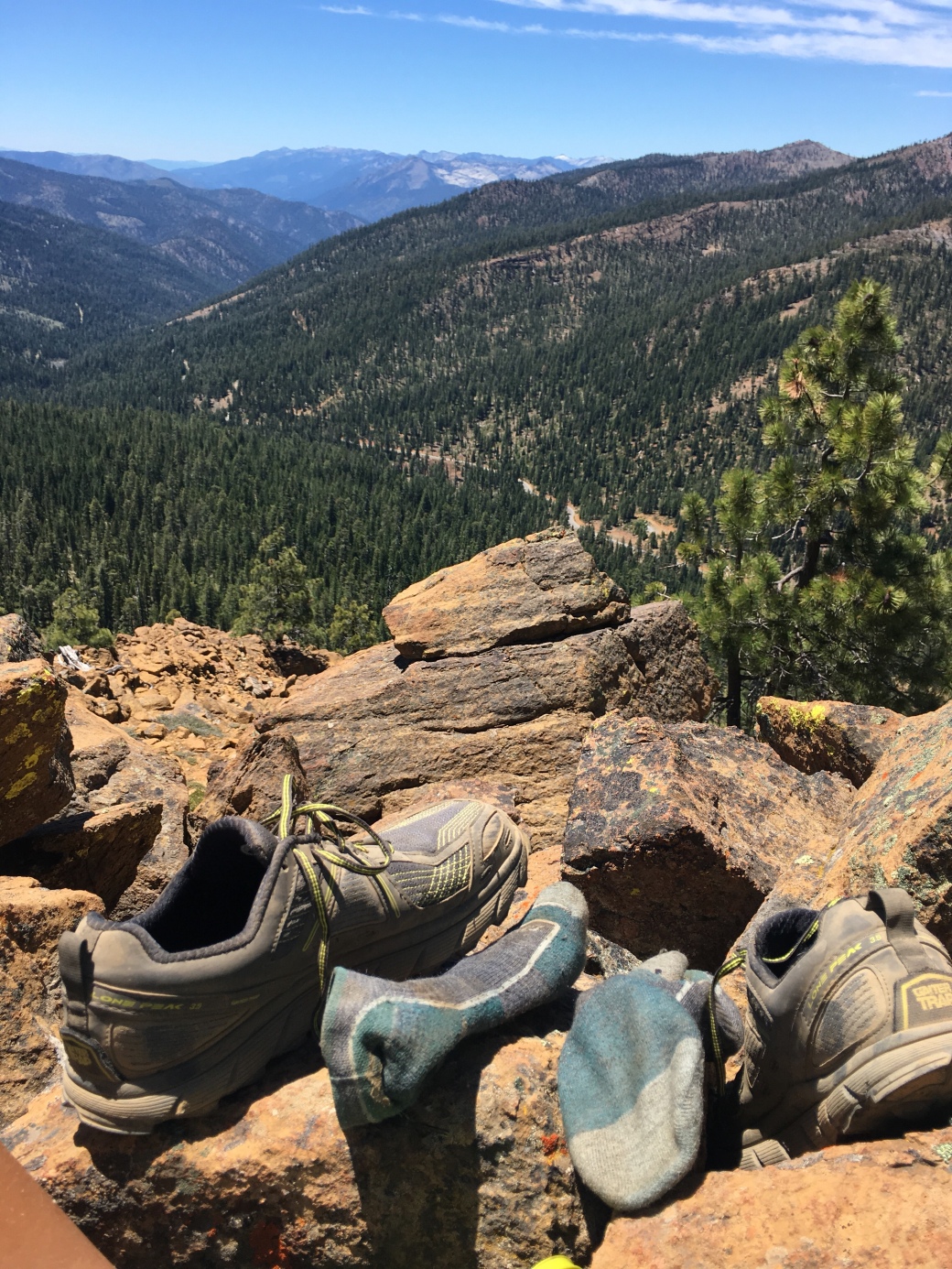 Even though I knew there was still a loooong ways to go it somehow went fast – I guess it was because the trail was so flat. The 2,8 miles to the next stream went by flying and we again met up with the others. 3,8 miles to go to the next stream – let’s crush it!! Here we took a longer rest break with T-Bone before pushing through the last 6 miles. We were by this point already pretty tired but because it was flat we did pretty good speed. The trail stayed on hillsides and from one side of the valley we could see the trail ahead for miles as it cut its way through the rocks and bushes on the other side of the valley. 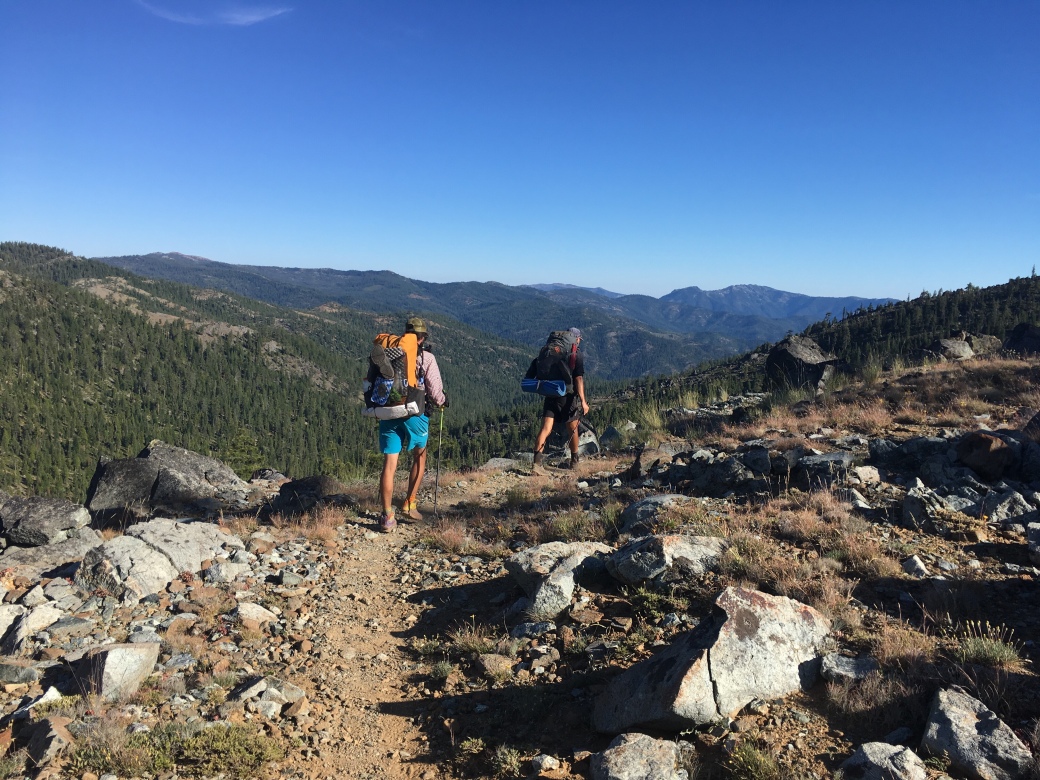 We finally reached the stream by which we planned to camp and found ahead lots of people, maybe 4 tents in total. So we decided to make a new campsite in between the fallen trees – there were luckily plenty of flat spots and also rocks for a small fire ring. After having set up our camp we settled down to eat our dinner just as Coconut and Tomb Raider came by. They decided to eat their dinner with us and then hike three additional miles. 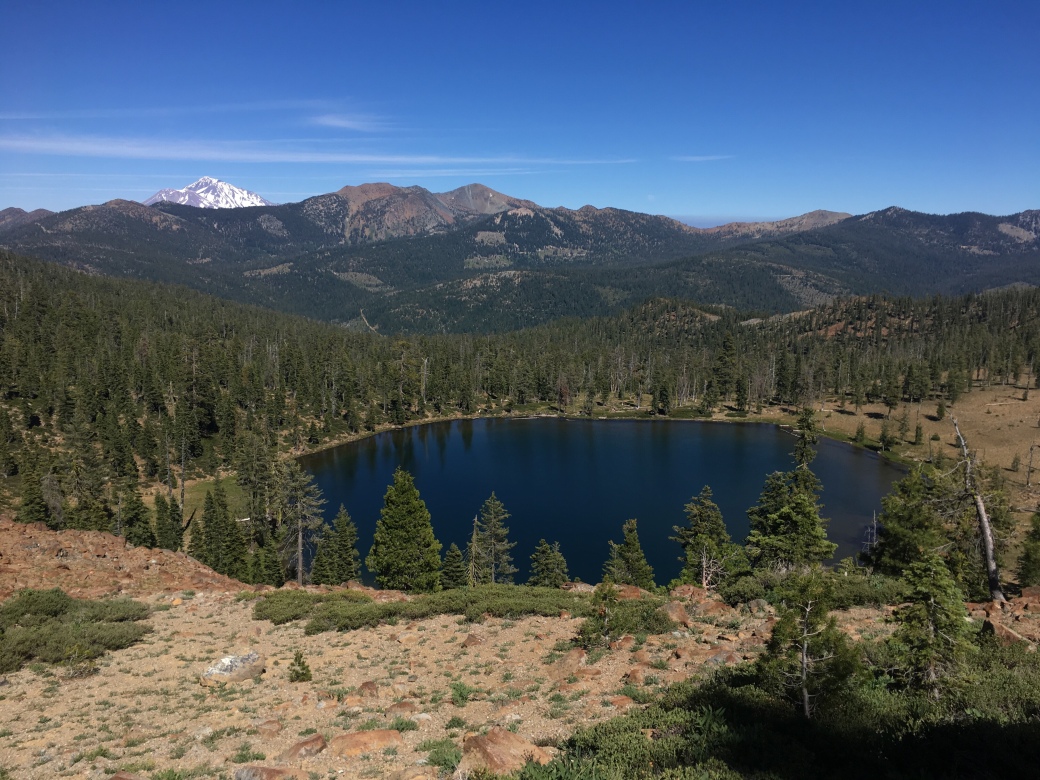 So all in all we did 29,5 miles of pretty easy & flat walking, had good company and a nice evening. 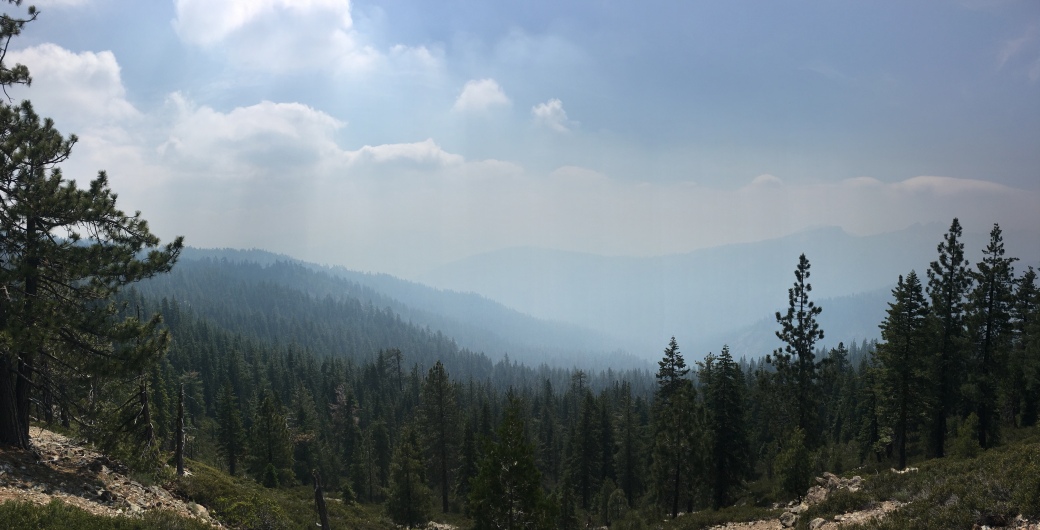 We had a pretty normal start – at 7:50 – but already as we first got out of our tents we could see that it was very hazy and very windy. It had been clear last night so something was fishy: we later realized that it is clearly smoke from forest fires because it was a uniform layer of reddish cloud and not normal clouds. We could even smell the smoke and thus put on our buffs to try to avoid getting a headache. 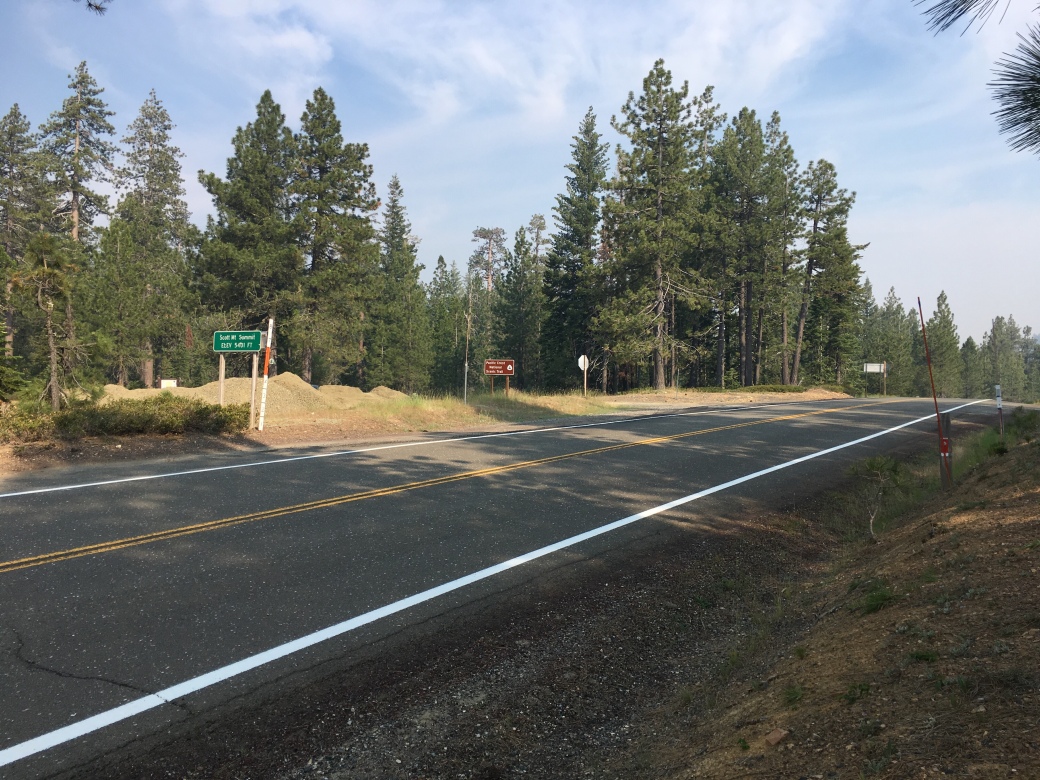 We had about three miles to the Highway (Scott Summit) and so we figured that if the fire was close/any danger to us then there would be people from the Forest Service there to talk to us. We met a snake but other than that this walk went fast – and there was noone there, so we pushed on. 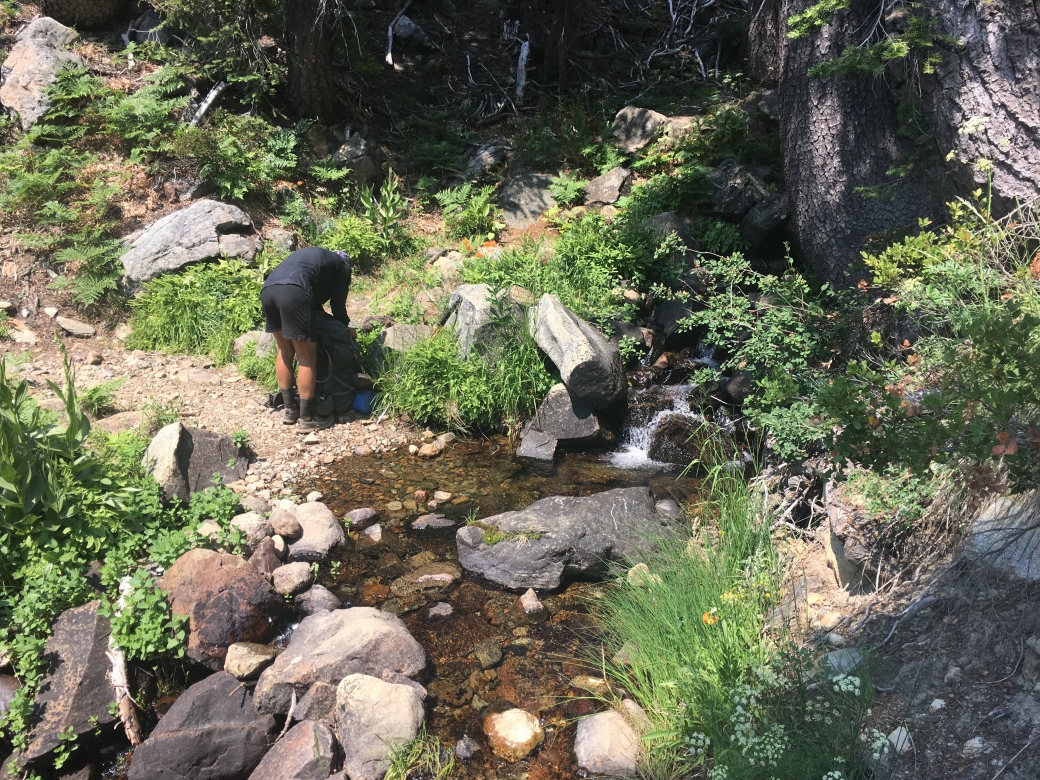 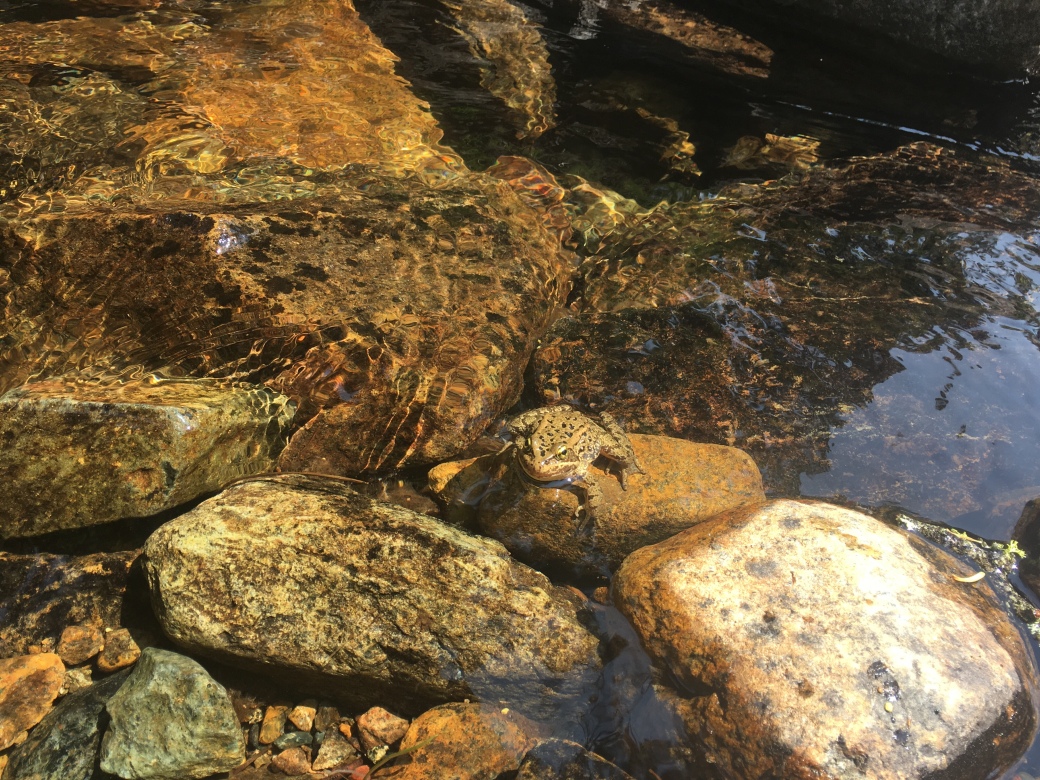 We had now two climbs ahead of us, both about 400 meters. The first one went really fast and was barely noticeable. We filled up our water bottles at a big stream and took pictures of some frogs but then it was time for the next climb. The trail slowly climbed out of the pine forest and into a rocky, alpine environment – this place was called Trinity Alps.

By the start of the second climb Kristians and T-Bone were already ahead of me but we had decided to meet for lunch at the top of the climb. On my way up I met an older couple who were volunteering at a kids backpacking camp and were on their way to meet a girl who had been feeling unwell during an overnight stay in the wild. We had a good conversation and I even got to speak some Danish – it turned out the woman had spent many years studying in Norway and could thus speak Norwegian. 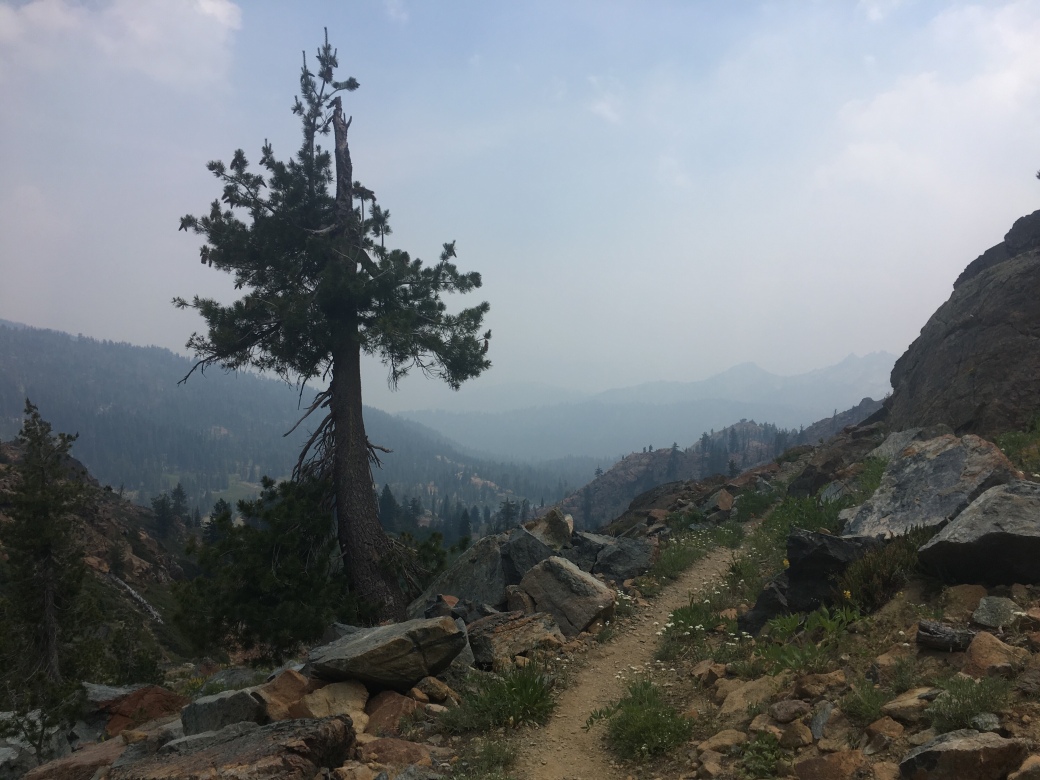 Once we got to the top we had lunch – the couple actually joined us as they had time to kill anyway, so we had a nice chat. Just over the ridge we had hazy views in the distance but right under us were about four small lakes – the Boulder Lakes. 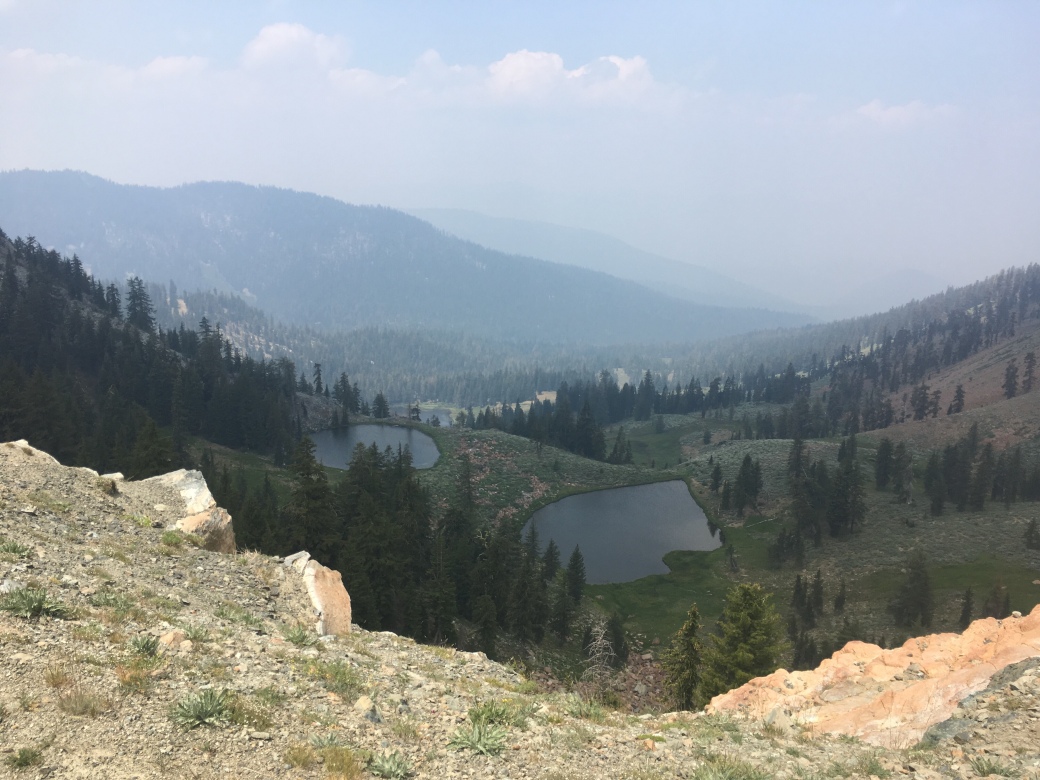 After lunch we had just 6 miles to go, it was still windy & at first cold, but at least it was clearing up a bit so we got some good views of the surrounding valleys. The going went slowly and there was a fair share of uphill. We then had to get a bit more water & took a little stop to take photis and rest our feet. T-Bone was now way ahead of me and Kristians but then the trail started a long downhill – we thought it’d go fast but was somehow still slow going. 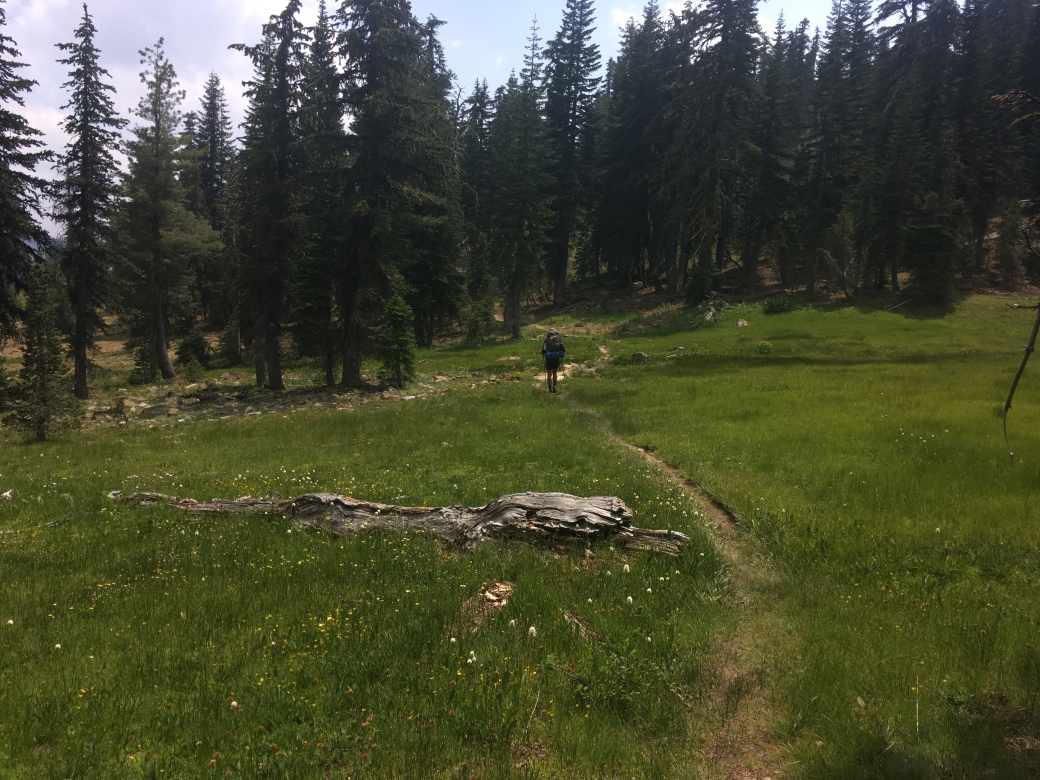 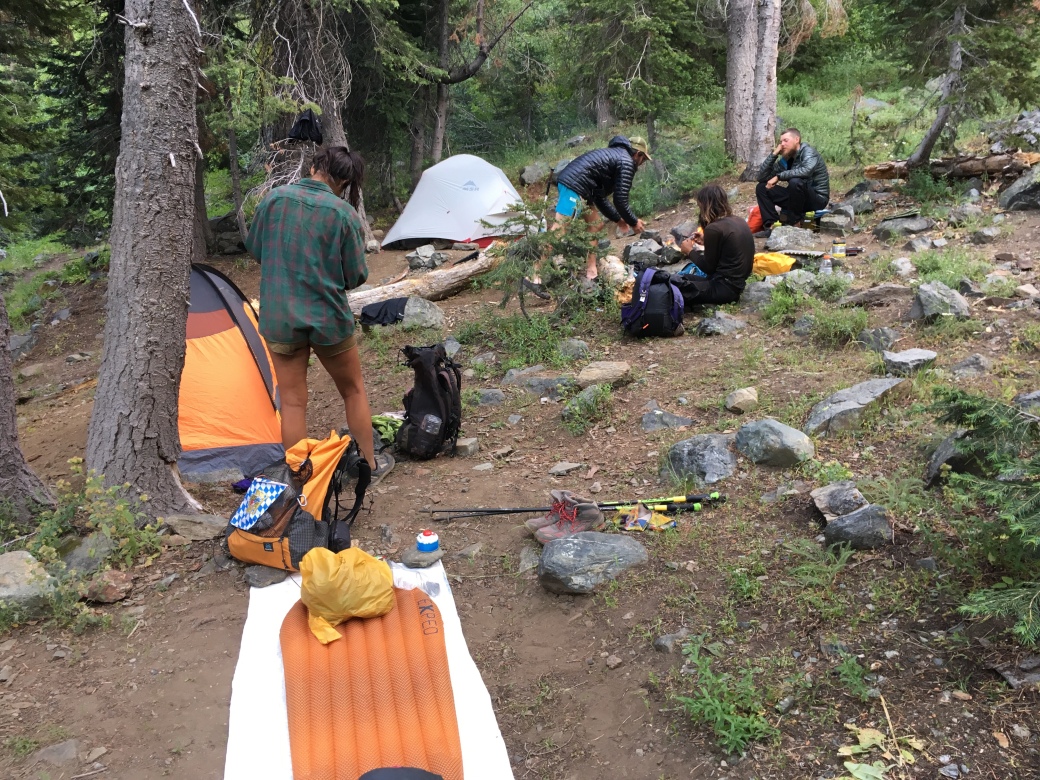 We finally reached the campsite at about 18 and debated about staying because the tentsites were perhaps not ideal but ahead of us was a dry and steep uphill section so we decided to stick to the original plan. We washed ourselves a bit in the freezing cold water, set up camp, made a big fire and had just started to enjoy our dinners when we saw Coconut & Tomb Raider suddenly walking towards us. We thought they were ahead of us!! They had camped, apparently, just three miles further than we had last night, but a bit off trail, and slept long this morning so we actually ended up passing them. They decided to camp with us – we needed to celebrate 4th of July together as a family, after all!

We all agreed to wake up early the next day in order to get to town at a normal time, we still had 20 miles to make.