Even though we had a short day ahead – only 16km (10mi) – we still decided to rather start early to get to Hiker Heaven before lunch and have the remaining of the day just resting, eating and hydrating. Of course we’d also shower and do laundry. 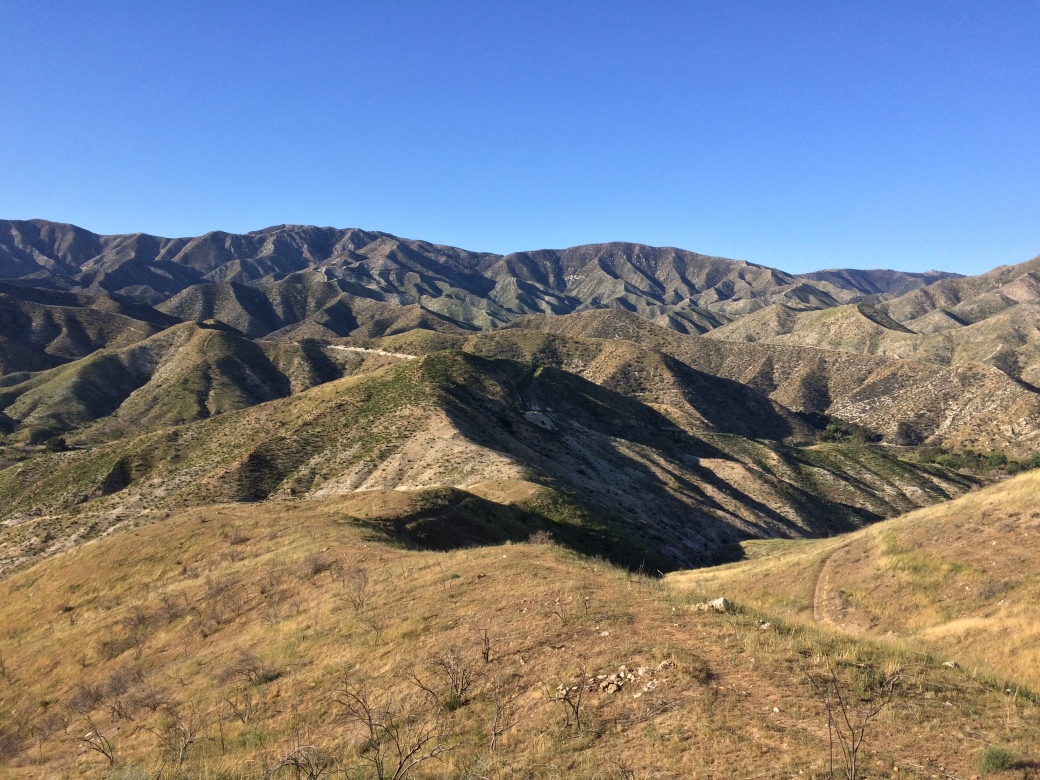 The only thing to mention from the walk there was probably the famous Vasquez Rocks. These ancient and beautiful rock formations have actually starred in a few (Star Trek, Planet of the Apes, etc) movies as the landscape of various alien planets. The walk through that area was very interesting, sort of felt as if we were not on Earth.

We got to Hiker Heaven and it was pretty much what the name says. During the tour around the property it was clear that they had thought of everything hikers would need and had it all ready. And because we were a couple we got lucky enough to get our own room in a trailer-house and it was great! So much privacy! And a bed – it had been nearly a month since we’d seen one of those.

As the place was around 1,6km (1mi) from the trail and also the town center they even provided a shuttle ride back and forth every one and a half hours. We used it to get to the pizza place and a resupply store.

In the evening we just enjoyed our private room and the good wifi connection which allowed us to empty our phones from all the photos and videos.

The plan was to just have a little bit of a later start that day, so we were in no rush getting out of the bed. When we finally did get ready to go it was already 10 o’clock, which is considered pretty late, especially with the new hot weather rolling in – it was already scorching hot.

We got a message from Team Seattle that they are just rolling in to the town so we took the shuttle downtown and decided to grab a cup of coffee with them before heading back out to the trail.

Finally, somewhere around noon we were ready to hit the road. The sun was blasting like we hadn’t felt before. Sweat pouring down us from all sides, we made our way through the town and back into the mountains, some small shade here and there but in general our only layer of protection is the sun screen and clothes and as I am a very classy dude I of course wear all black, ou yea.

We caught up with Cribbage and Hobbit, had some small talk and then moved on but as the uphill didn’t yield they passed us soon after. We agreed to have lunch together probably at the Bear Spring, which was a few miles ahead, after the highest peak of the day. Once we arrived there, however, they were not there, but as we liked the place we just had lunch on our own and assumed that they were either afraid of all the bees that were also hydrating at the water source or they went on a few more miles to the water cache.

Once we were done with lunch and moved on again we met them at the water cache – just as assumed. We didn’t feel like we were in any rush so we decided to just hang out with them until they finish what for them was already dinner and then do another 5ish miles before we call it a day.

So now to the scariest moment of the whole PCT so far: as we continued our climb up yet another mountain, maybe around 2 minutes after we left the water cache, we were all 4 of us walking in a line, me being the fourth. But then Stiina decided to let me in front of her as she is slower and likes to stay in the back, especially during uphills. Around 10 seconds later, suddenly and out of nowhere, this huge dark gray rattle snake just jumps right between my legs! It was rattling and hissing and going all nuts and it was all happening right under me. I really got surprised by it so I didn’t have time to regroup and I couldn’t jump over and away from it because Hobbit was right in front of me and Stiina right behind. As I was sort of leaning backwards, I was on my heels and saw the snake right under my shoe – it looked like I am about to just step right on it and I knew if I did that it’s going to strike me right away. So I just jumped. I want to say that I just jumped off the cliff but it wasn’t really that steep, even though it was a good 45-60 degree embankment covered in rocks and bushes. I just jumped to the side and landed on my ass, but there was no time to get too comfortable as Stiina shouted that the snake went right after me. I jumped again, this time on my feet, and got a few steps away from that place. 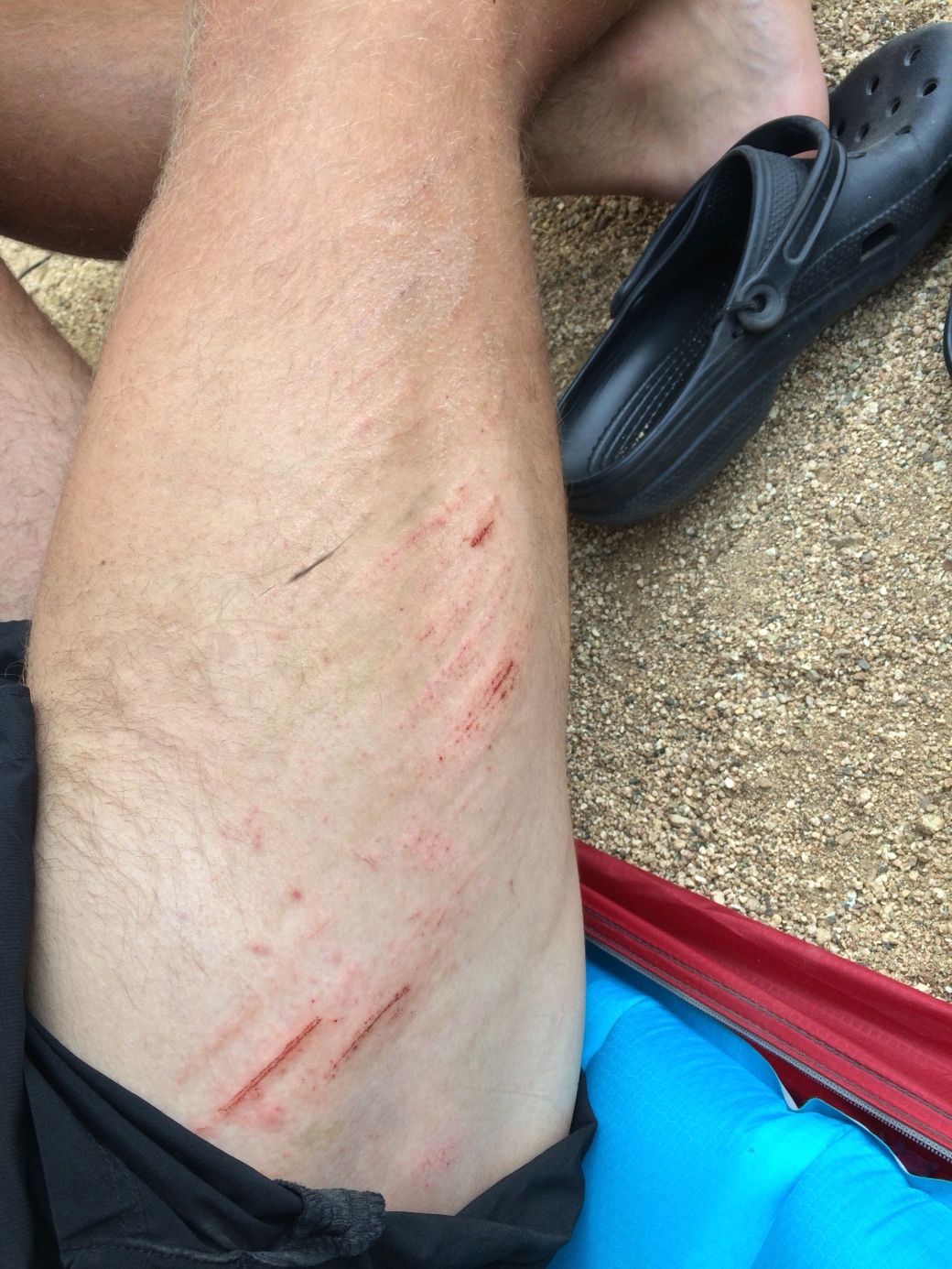 The snake had already hidden itself somewhere and we didn’t see it again. The damage of the event was a scratched ass and leg, a bleeding elbow and a piece of skin hanging from the pinky; still better than a snake bite! I think that my backpack probably helped to take some of the fall as I managed to make a few holes in it while sliding down over the rocks. 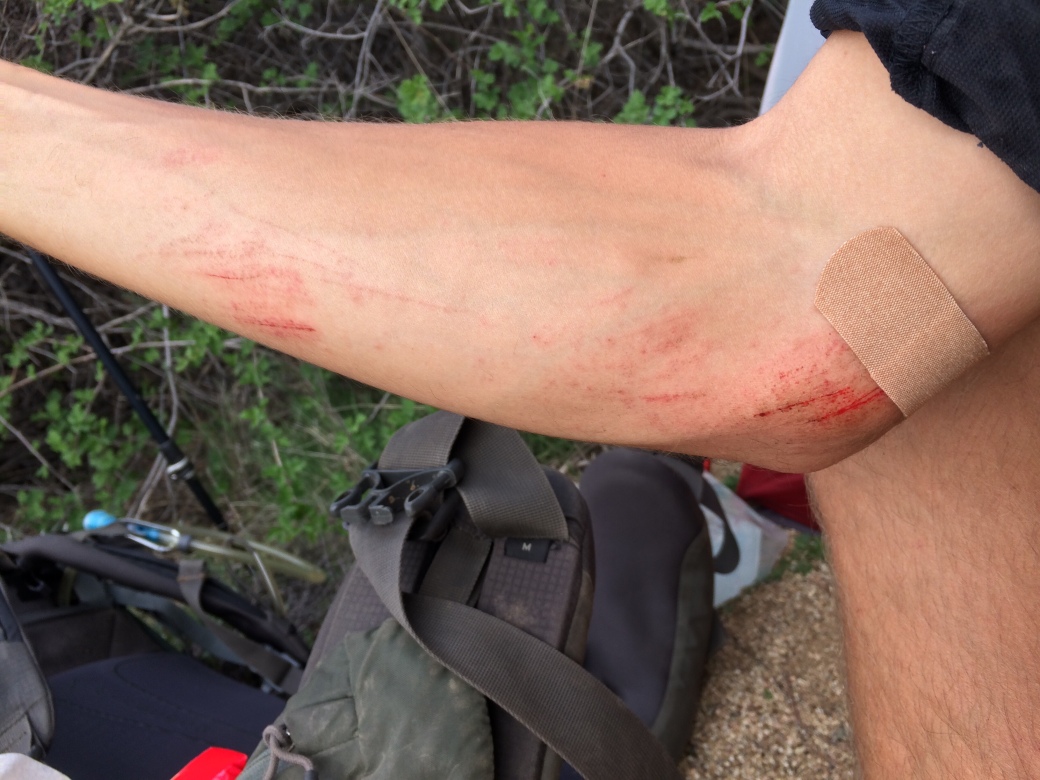 I barely managed to get back up on the path because of the steepness of the hill. First aid was in order, so with help from Stiina I managed to wash up and bandage my bruises and around 5 minutes later I was ready to continue even though I could still feel my body pumping from the adrenaline rush to my system. I just thought that it will at least help me with the uphill we were seizing. Everyone was pretty amazed by what just happened so it was the hot topic for the next bit.

However after walking only around 10-15 minutes Cribbage threw the towel in and so we joined him and decided to camp a bit earlier than we had initially planned. The rest of the evening went smooth we had our dinner while Cribbage was having his daily evening Cuban cigar. We shared some more trail tales and enjoyed the evening, but what a trail story I can tell now.