We got up fairly early (I mean for us) – at about 5:45 and left camp around 7. Hobbit and Cribbage were a bit faster to pack up their things as they don’t do cooked breakfast so we just planned to catch up with them later on during the day.

We had two mountain ranges to pass that day and even though the ascents were tough the weather wasn’t too hot, there was even a nice breeze. The plan was to reach the Green Valley road by lunchtime so that we could hitchhike to the famous trail angel home called Casa de Luna.

We pushed through the undulating miles and crossed a dirt road when suddenly – trail magic! We chugged down a beer & soda respectively and then quickly continued hiking in order to get back to the relative shade of the trail. Right after the first bend, however, we met up with Cribbage and Hobbit who had been smart and were drinking their drinks in the shade. We decided to hike together for the rest of the day.

Some more hills, countless bends, great conversations and beautiful views we finally reached the road. Without much hope we got right into throwing our thumbs up, but sadly the first car coming our way was a big truck with a trailer. Me and Hobbit didn’t even bother keeping our thumbs up but the boys did. To our amazement the truck stopped and picked us all up – it turned out to be a guy who was working on movie sets, currently for the upcoming Transformers movie. He dropped us off at the store where we bought some food and drinks and then walked down to Casa de Luna.

Casa de Luna is a legendary place on the PCT, ran by a nice couple named Terri & Joe. What makes their place super cool is the magical Manzanita forest behind their house – there’s room for about 60 tents there! As they encourage rock painting there are also small pieces of art (painted by previous pct hikers) scattered all over the forest.

There was about 5 other hikers already there and 5 more coming from the store. Many more arrived in the evening – Wit and Full Sail among them. After everyone had settled in we wrote our names on the big white sheet on the wall and chatted and chilled out until dinner. There was taco salad for dinner and if you weren’t careful then also a slap on your hand with a stick (never lift your plate over the food!). But the taco & salad & beans combo was awesome and another trail angel also brought ice cream – even vegan ones just for us!

All in all it was such a great experience to stay at Casa de Luna and rest for half a day. Every PCT hiker should definitely stop by there.

We packed up our stuff and then went inside for some coffee and breakfast at around 6:00. Everybody had pancakes but as we knew they weren’t gonna be vegan we had come prepared and bought some cheerios & almond milk from the store. I also chatted a bit with Joe about his hiking and pancake-making.

After breakfast it was time to dance in order to earn our PCT2018 bandanas. Everyone showed off their weird dance moves and even though I was shy & hesitant at first I finally managed to pull off some moves and earn the prize. We then all posed in front of the PCT 2018 wall and took group photos – that was concluded by a hilarious surprise by Terri. 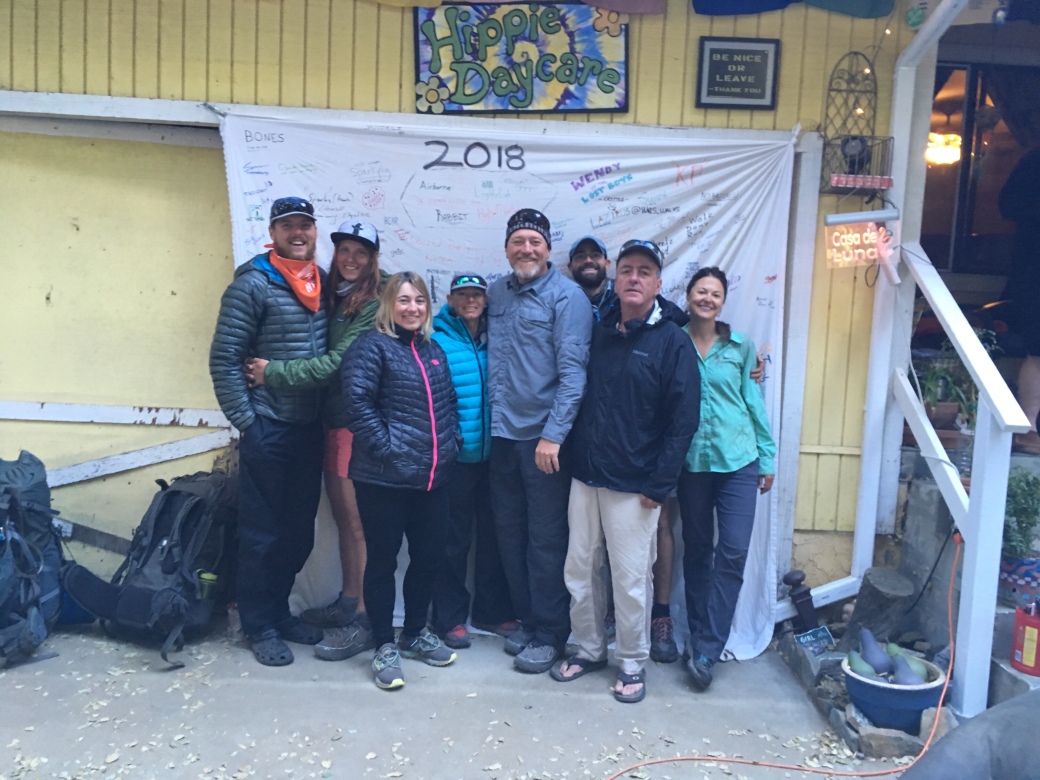 But then it was time to move on – all six of us (Cribbage, Hobbit, Wit, Full Sail and us two) went to the store to buy supplies for the next trail section up to Hikertown (2 days). We then got a ride back to the trailhead by Terri and said goodbye with big hugs.

A hard day lay ahead – one water source, lots of altitude gain, 19 miles and the heat. First half of the day was uphill only and Full Sail set an insane pace – not even the guys could catch up with her. Me and Hobbit stayed in the back because we had to take a stretching break due to the cramping calves. Nevertheless, after three hours of gruelling up&downhill we made it to the water spring and had a longer break. We also saw Space Jam but he was just leaving as we arrived.

As we had lunch we decided that we can now be a tramily – trail family. Cribbage was designated as the weird uncle, us two as the weird cousins/exchange students from Eastern Europe and Full Sail as the poster child of the family (who everyone secretly hated and was jealous of). And so it was that we bonded with these four weirdos 😀

After the lunchbreak we kicked the dirt and hiked about three more uphill hours until the next water cache and then some more easier trail until the Sawmill Campground. We set up the tents, cooked our dinners and then enjoyed each other’s company around some actual fire. After the darkness set in we had clear starry skies and saw a great view of the desert before us, with town lights & the blinking lights of all the windmills. Another trail day well spent.

As usual we had trouble waking up to our alarm and ended up pushing the snooze button three or four times. By the time we were finally packed & eaten the others had already left so we had to get cracking. Most of the day was supposedly going to be a descent so I was really looking forward to that but the first bit was a tough descent up until the 500 mile marker. For some reason the morning ascent was very slow-going for me so by the time I got to the marker Wit, Full Sail and Kristians were already waiting for me. Even though the marker wasn’t crazy astonishing in its looks, we took all the necessary photos and continued.

The plan for the day was to get to Hikertown & Wee Vill market in order to resupply for the upcoming tough three day stretch until Tehachapi. Initially we didn’t even plan to step into Hikertown but more about that later on.

For the rest of the day us four hiked together, Cribbage and Hobbit being somewhere ahead. After the climb of the morning the trail got more smooth & undulating and we passed through lots of greenery & had great views of the surrounding hills & valleys. As Hikertown is located at the Mojave desert, the trail slowly started to descend. After taking a sharp turn we looked for the next trail marker and Wit suddenly yelled “Snake!”. We had been looking up and around so Wit was the only one who had looked down and seen this big, fully grown brownish rattle snake right on the trail. Kristians of course got out his selfie stick and filmed as he chased the snake off into the bushes.

We continued our descent and finally reached the Horse Campground (consisting of exactly one picnic table, one side of it held up by pinecones) where we decided to have our lunches. We ate and talked and were already almost done when suddenly Cribbage and Hobbit rolled in – apparently they had had a break off-trail and we had passed them. So we extended our lunch break and chilled out together, making plans for the evening.

Us four then left the two old farts behind and carried on downhill – supposedly we had just 10 miles to go, mainly downhill. We already had great views of the upcoming totally flat desert section – a daunting task lay ahead for sure. At the end of the steeper downhill section we found a stream and filled in the bottles – the day wasn’t super hot but because of the lack of a breeze it was pretty hot when hiking. As we kept descending it got hotter and hotter and the uphills never seemed to end. Instead of guiding us straight down to the desert the trail kept following the mountain sides, rolling around and over. After a final 20 minute break we pushed on, crossed the last uphills and finally descended onto the desert floor.

A long dirt road inbetween fields took us to a busy highway and as we had to wait for Cribbage and Hobbit we decided to check out Hikertown – it was right there, after all. We got in and admitted that the place looked pretty cool with this whole wild west movie set theme going on. We met up with all the hikers who were already there, put the laundry going and took showers. We made a new plan: because the 20-mile totally flat & super hot desert section lay ahead of us we wanted to get a very early start the next day so we planned to leave our bags at Hikertown to camp there later and just go resupply & eat at the Wee Vill market.

After Cribbage and Hobbit arrived & showered we called for the shuttle to the store while other hikers got a ride to the Neenach market instead. We had a great time at Wee Vill’s – they have great service, lots of vegan options & ok resupply for hikers. We all sat outside at the yard and had our big meals when five other hikers came in – apparently, because they had decided to come to Wee Vill’s and not Neenach market (which is owned by the guy who runs Hikertown), they were basically thrown out. Therefore we sort of expected that we’d also be thrown out upon our arrival & readjusted our plans: Kristians and I would night hike and the others would camp at Wee Vill and hike onwards the next morning.

As expected – upon our return to Hikertown we were told that the place is full and that we should leave. Pretty much all the hikers were going to nighthike, though, so in the end only two hikers stayed there?! But it didn’t matter – Kristians and I therefore packed our things and lots of water (the next reliable water was supposed to be in 24 miles) and set off around 20:20, it was already dark. That is also the reason I don’t have any photos to add here.

We decided not to use our headlamps unless necessary and as the moon shone very bright it was easy to navigate. We first crossed some fields but then reached the Los Angeles aqueduct, which the trail was to follow for the next 20 miles. We were both getting tired and sleepy of course and planned to soon find a tentsite to get at least 4 hours of rest. After about 4 miles we caught up with Space Jam and then soon after with Amanita – so we just sat down on the aqueduct and chilled out for about 20 minutes. I decided to also take an Ibuprofen as my feet were really hurting from the flat road.

We set off again but soon after Amanita had some foot problems and had to stop. Space Jam hiked faster and we didn’t catch up with him anymore but we kept pushing until at about midnight we reached a record – 31 miles / 50 kilometers in one day!! We then quickly set up our tent at the roadside and settled in for nearly four hours of sleep…