This post will be a little bit different – more of a conclusion of the two days rather than a detailed overview of both.

The days are seemingly blending all together. We did two 19-mile (30km) days, both with A LOT of ascents and descents and a big water carry. Throughout both days we still stayed pretty high regarding the elevation and thus the freezing cold winds troubled us still.

It’s been mainly cloudy, too – so much so that in the morning of day 29 we woke up to snow! This day also officially marks our one month of being in the US and we also passed 700-kilometer mark of the PCT.

It’s been a bit uncomfortable being quite chilly throughout the days (except for going uphill, but even then a freezing breeze would come) and also in the evenings and mornings in the tent. It’s crazy how much the temperature can fluctuate in the Californian desert. And it’s crazy how the desert can be pretty high-altitude. 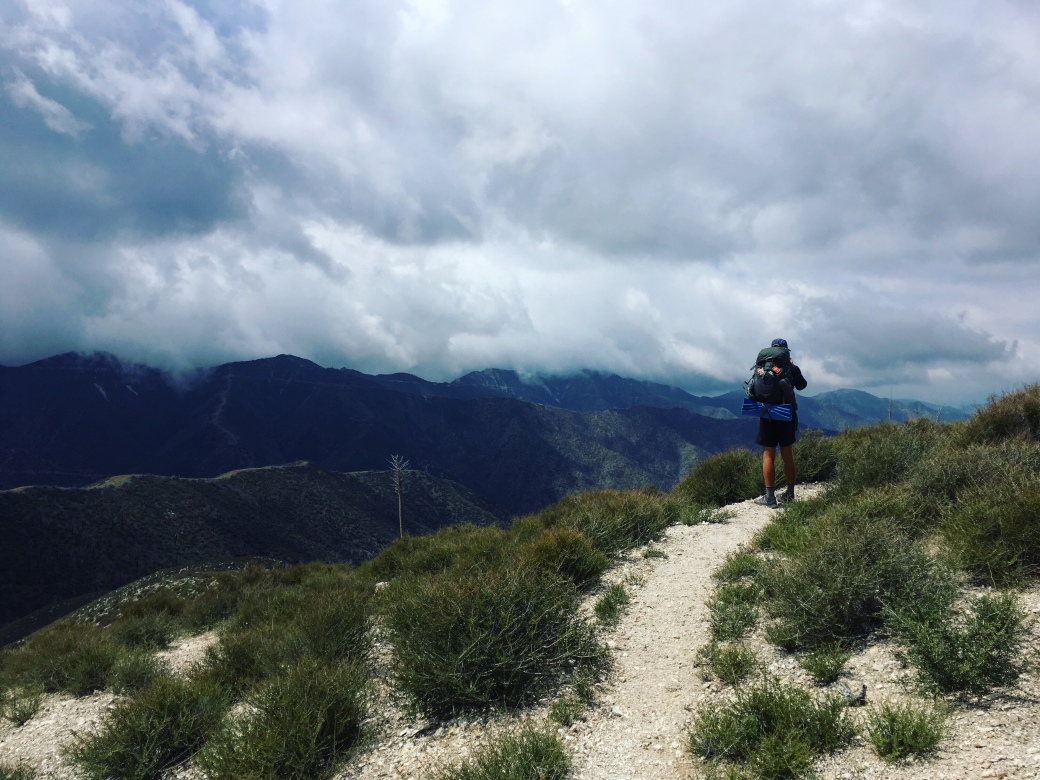 Our feet feel strong in the mornings and generally throughout the day too, but longer descents really make the heels and ankles sore by the end of the day. Muscle pain, luckily, is a thing if the past.

We’ve been hiking alone for nearly a week now, even though we see a couple of other hikers during the day. But I think our pace is pretty good and we hike well together. Today we bumped into Emmenita about three or four times – that man is doing insane mileage! But it’s been cool to catch up (we met at Rich’s place in Wrightwood) and exchange some trail stories.

Today I also realized that the trail is not only visually and physically stimulating but also challenges your nose – there are so many plants around and the smells are different in every valley. There’s the fresh cucumber scent, the cinnamon, the nutmeg scent, the rosemary scent and if course the marijuana smell (that’s the poodle dog bush!). It’s kind of like Christmas.

Tonight we’re camping in a dried up riverbed at the entry to a valley, close to Vasquez Rocks, actually. Tomorrow we have about 530m ascent, 430m descent and 16 kilometers ahead of us – we plan to get to the Hiker Heaven by lunchtime. Hiker Heaven is the home of the Saufley’s: they let you camp out, offer showers, laundry, wifi and everything else you might need plus a great evening! We’re super excited to get there and take the afternoon off.