We enjoyed the bed for as long as we could, getting up only at 7. We had a quick breakfast, packed our three things and then said bye to the other hikers. Already when exiting the house we could feel it was windy and a bit chilly. Rich gave us a ride up to the trailhead at Inspiration Point, where the winds were even worse. We were super sad to say goodbye to Rich but were incredibly lucky to have met him! These sorts of encounters make the trail worth all the pain.

Once we got up onto Baden-Powell after a couple of hours of hiking the wind was right in our faces and freezing cold. We could only enjoy 5 minutes on the peak, fingers nearly freezing off. Didn’t even take photos of the views – well, the clouds pretty much covered everything anyway. We quickly started the first bigger descent and went as fast as we could through the mountain passes where the wind was blowing right on us – we nearly ran. Once we got low enough to get some windshade and reached a water source we had a quick snack – it was too cold to have a nice long break. We decided not to take a lot of water from there and rather push on to reach the Endangered Species Closure detour and the Buckthorn campground where there would be water.

Well, nothing to wait for (except for freezing), so we set off. The trail continued down but soon ascended nearly to the top of Mt Williams. We again ran through the windy bits and crossed the Highway 2 for about six more times as the trail descended and ascended yet again. Finally we made it to the detour, which started with a 5 km roadwalk. As this was evening there were no cars to hitch. So we just pushed through it, trying to keep ourselves warm. 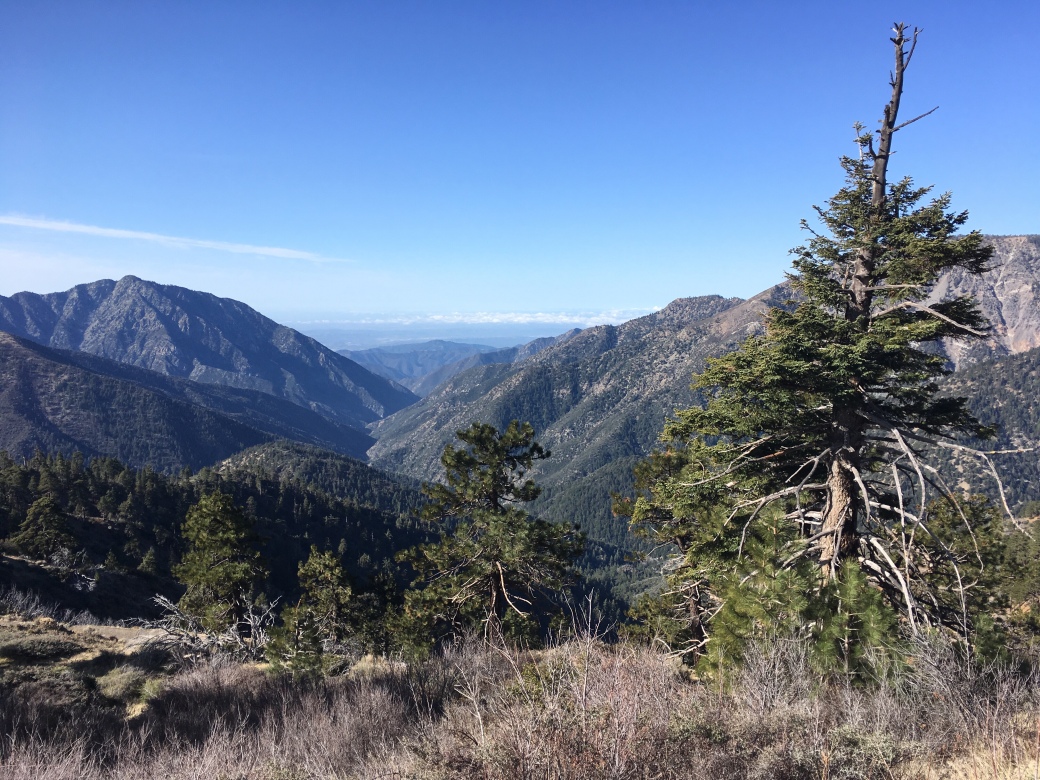 We finally made it to the junction and then walked into the campgrounds. Because it’s not yet the season, the campground was closed and empty. Thankfully the water spigot was working, however, so we set up camp stealthily in the dark, ate our dinner and braced ourselves for a freezing night.

We slept in as we were terribly tired from the previous day and because it was still incredibly cold outside. Somehow, though, we later managed to get up, make breakfast and pack.

We hit the trail finally at about 9:40, but the whole morning seemed to take forever, especially the long steep ascent. We somehow took a lot of breaks (putting a plaster on, taking the jacket off, peeing, adjusting this and that) and so with three hours we’d only done 9 kilometers. We decided then that this would be a short day because of the previous long and hard day. 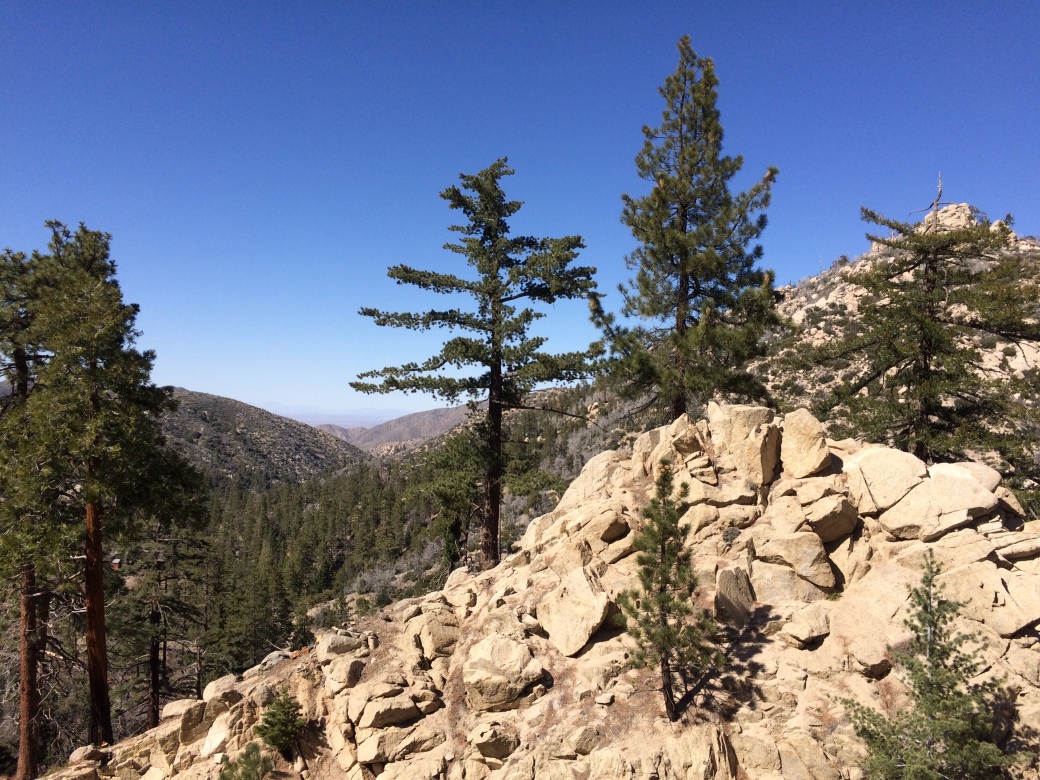 We had been walking on the top of the hills for an hour or so when the descent finally started. We found a good sunny and windprotected spot and had a long relaxing break. A couple of other hikers also passed us and said hi. After the well-earned break we continued the downhill until a cool little cabin. There was a stack of postcards here and a sign read: “Free PCT postcard. Postage paid”. So we both picked up a card, wrote on it and then sent our first ever postcards. Let’s hope they do internationals! 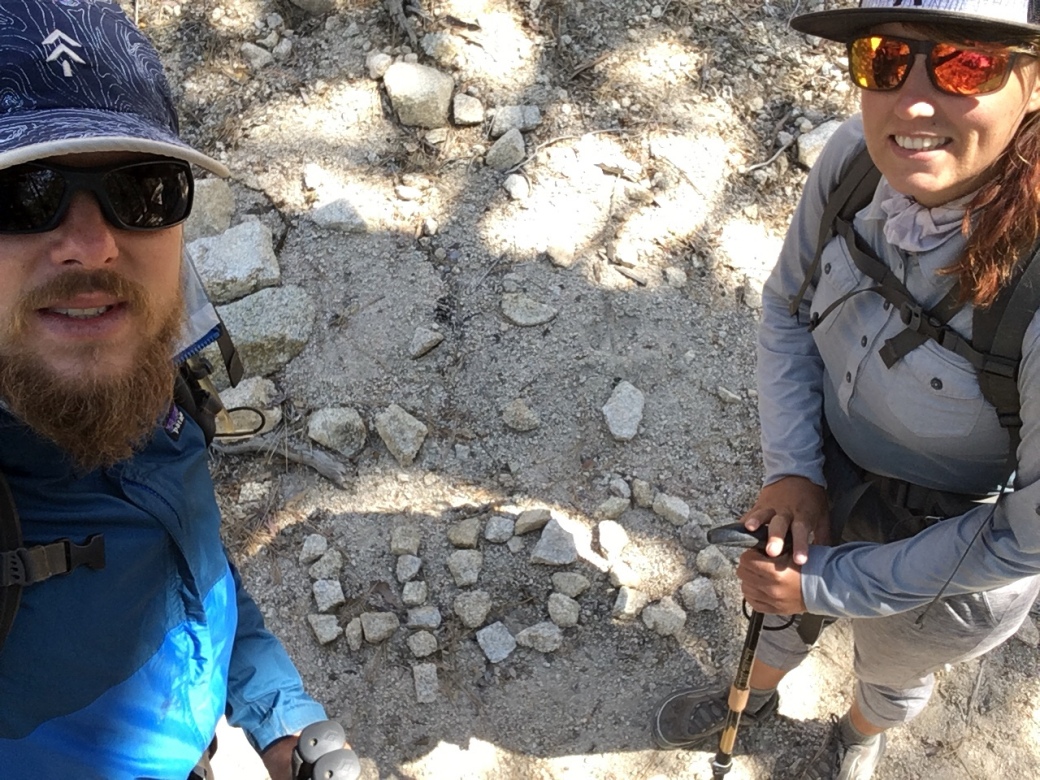 Besides getting to send a postcard we had also just passed the 400-mile marker (640km)! So happy 🙂

We continued our hike – the afternoon seemingly going faster. We were going to do 15 kilometers more so that we could camp by a water source. The trail stayed relatively flat but the cold winds stayed were there to make us cold whenever we were trying to enjoy a nice view or take a short break.

What felt like an eternity of a day – we finally made it to the Sulphur Springs Trail Camp, quickly set up the tent and got to making dinner. The winds were seeminly dying out which was good because even though we were camped in a valley the area was quite open. Luckily the night passed with calm winds and we managed to fully rest, meaning we could do a longer day tomorrow…