As we were waking up and packing our stuff in the morning an older couple passed us – named Hobbit and Cribbage. We talked a bit and they moved on. We set off late again – after 9.

We slowly descended as we made our way out of the Deep Creek canyon. On the way out we passed a big dam and then did our first proper river crossing of the PCT (when I say proper I just mean that it required taking off shoes). Here we met the couple from the morning again as they were having a break. We discussed that we’d all like to get to the Cleghorn Picnic area by Silverwood Lake by the evening because one could order pizza delivery there! So we agreed to hopefully meet again later and set off again. 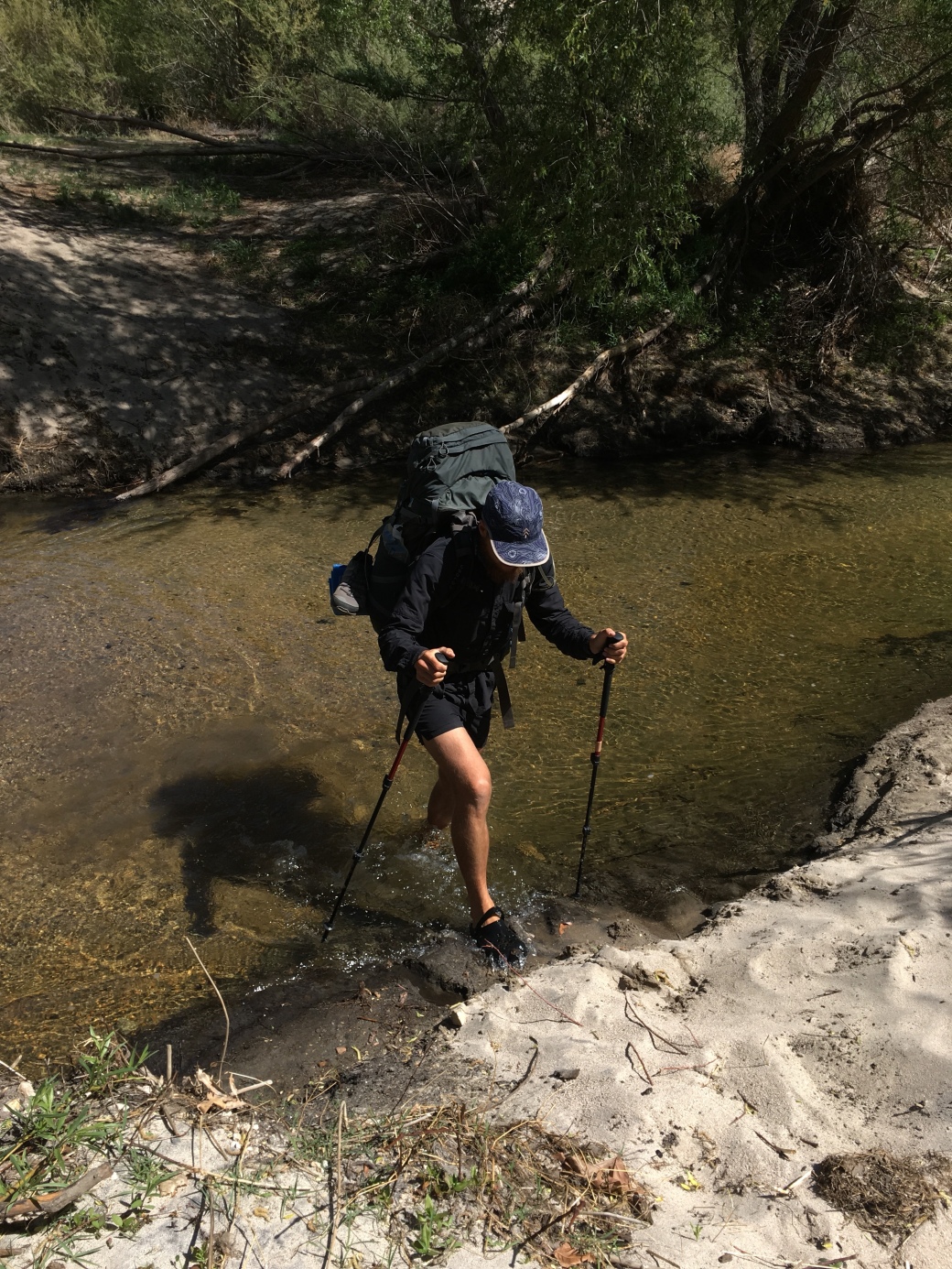 The path then started to ascend again and followed the mountainsides, giving us a great view of the flat desert to our right. As clockwork, every day, after four hours of hiking we’d have our lunch (Kristians for some reason has this Soviet idea that you’ve only deserved a break if you work for four hours, no other way is possible…sometimes I call him the Slave Driver). So we stopped by a water stream and took a long break. When we were almost done I went to fill in my water bottle and saw that Hobbit and Cribbage had caught up with us! Again we cracked some bad jokes and agreed to meet later.

After we packed up we still had a long ways to go, luckily not that much of uphills, though. We had to cross a bunch of roads, a bridge and another big dam. The trail then ascended over some desert hills and I knew we must be close to the lake – as we crested the ridge the dark blue lake appeared out of nowhere. The path followed the mountainside toward the lake and gave us amazing views of the sandy beaches and coves. As it isn’t the summer season there weren’t many people around.

Even though we were both hurting we pushed the final kilometers to the campsite as the sun was getting lower and the temperature colder. My right foot was still swollen and sore from the bee sting but there wasn’t much I could do but to keep going and hope that the rest during the night would make things better.

The first thing we did upon arrival was to empty trash out of our bags. The second thing we did was to order two large vegan pizzas and drinks. We didn’t set up camp yet because it wasn’t technically allowed so we just sat and waited.

As we waited Cribbage showed up – he said he had just ordered a pizza and that the lady on the phone said that someone else (with an Eastern European accent) had just ordered a pizza there – sadly we had to then pay separately for delivery. But whatever – we moved to the same ‘campsite’ aka bushes with a table and chatted away while the pizza was being delivered. After a while we decided to camp there too, risking a possible fine, but we heard that the rangers don’t really check in the workdays. Another hiker joined us after the pizzas arrived so we had a pretty cozy evening. As hiker midnight is already at 20:00 we all soon got tired and had to say good night.

We all woke up around six so that we could be packed in case the rangers should come checking. But we had such a good conversation about travelling, future plans and life in general that we ended up leaving the place only at 8.

From there the trail went up and up until a mountain pass from where we could see the flat desert again. The whole day there were very cold winds following us so we kept our jackets on for a long time before we finally got warm. And interestingly enough the cooler air temperature actually made our bodies move much faster. We felt so efficient while moving over the trail, over the rocks, ups and downs – it almost felt like we were gliding. It was somehow an amazing feeling. We followed the mountainsides and some ridges until we got to a fantastic viewpoint – we could see all the surrounding mountains, long trains and lots of highways with teeny-tiny cars on them like ants.

I kept complaining to Kristians that my foot is really bad and that I’d like a pre-lunch break but of course, because no random spot is good enough for the perfectionist, we only found a place that was out of the wind by 14:30 or so (way later than lunch was supposed to have been). Besides eating I also decided to investigate my foot – apparently, because it had been swollen, I had now two new blisters: between the big toe and the one next to it. I decided to plaster it like a barricade but then discovered that I had lost/misplaced my roll of plaster. So I ended up cutting off some strips of the bandage from my medkit and using the last of our Leukotape to make it stay on the foot. I knew this solution had to last for two days, until we got to Wrightwood.

After lunch we kept pushing on – a long section without any water was coming up and as if that wasn’t enough we also needed to ascend about 2200 meters over the evening and the next day. We passed under a major highway and over some rail tracks in order to get to the mountains on the other side of the valley. The trail then just climbed and climbed; occasionally the cold wind would threaten to blow us off the ridges. We finally passed the first mountain chain and descended into the next valley where, thanks to the trail angels, we got some more (very needed) water. We still had about 40km of no water and around 1800m of altitude gain ahead.

After a break we decided to still hike as much as we could that day so we started the climb for the mountain ridge that would lead us all the way to Wrightwood. As the sun was setting and winds calming we kept rising ever higher above the valley but there were no campsites anywhere. After about 5 kilometers (meaning we had done about 35km/21mi) that day, we found a bend in the trail were the path was just wide enough to barely fit our tent. As we knew there weren’t any tentsites ahead either and that we’d leave early we decided to just go for it (even though it’s bad trail etiquette to camp on the trail).

We set up the tent as it got dark and then had our dinner – so glad that our packs would be very light for the next day’s big ascent. We had a great view of the mountains across thd valley and as the sun set the orange evening colours and highways with all the car lights created an oddly beautiful image.